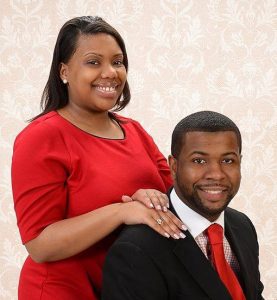 Born on October 6th, 1987, Pastor C.J. Hoyle is a servant of
the Lord Jesus Christ who is committed to bringing healing to hurting people, by pointing them to Calvary. Since repenting of his sins, being baptized in the name of Jesus and being filled with the Holy Ghost with the initial evidence of speaking in other tongues at the age of 14 (May 2002), Pastor Hoyle has been walking with Jesus with a desire to solely please Him. Two months after experiencing salvation, Pastor Hoyle acknowledged his call to preach the gospel and since that day has been engaging in active ministry for the last eighteen years. Currently, Pastor Hoyle serves as the founder and pastor of Calvary Apostolic Community Church in Fredericksburg, VA, which launched in August 2018.

Pastor Hoyle is also a graduate of Johnson C. Smith University (c/o 2009) where he received a B.A. in Psychology as well as Liberty University (c/o of 2015) where he received a M.A. in Marriage and Family Therapy. Pastor Hoyle is also two courses away from completing his Master of Theological Studies degree. Additionally, Elder Hoyle received theological education from the W.L. Bonner College (Columbia, SC) in 2008 as well as Gordon Conwell Theological Seminary (Charlotte, NC) from 2009-2011, prior to transferring to Liberty in 2011 entering the pastorate in 2018. On a more personal note, Elder Hoyle is married to Lady Shawnetta Hoyle (11 years) and is the proud father of three precious children (Aaliyah:9, Autumn:5 and Cayden:2). His family is certainly his highest earthly priority to him and always will be. The life and ministry of this servant of the Lord can be summed up in the belief that “if I am who God wants me to be, he will teach me what he wants me to know and help me to do what he wants me to do”.